The Schubert Club Band Shell is a delicate anticlastic shell designed as a visual landmark for Raspberry Island in the Mississippi River running through the city of St Paul.

This delicate roof structure is a double- curvature geometric form composed of glass and stainless steel that spans a wooden stage area and acts as a visual and acoustic framing device for performances. During the day the Schubert Band Shell offers a faceted display of reflected and diffused sunlight, while at night recessed lighting creates a glowing lantern effect in the midst of the Mississippi River. Whether viewed by day or night the Schubert Club Band Shell transforms this visually prominent site into a luminous landmark for the city of St Paul.

The geometry of the grid shell is based on a torus which produces repetition in the structural elements and connection details. The roof structure consists of two layers of stainless steel tubes and diagonal tension rods. The roof is stabilised by the double curvature in the transverse direction, and by two stainless steel edge beams on either side in the longitudinal direction. Two precast concrete abutments elevate the stainless steel lattice above the flood line of the Mississippi River. 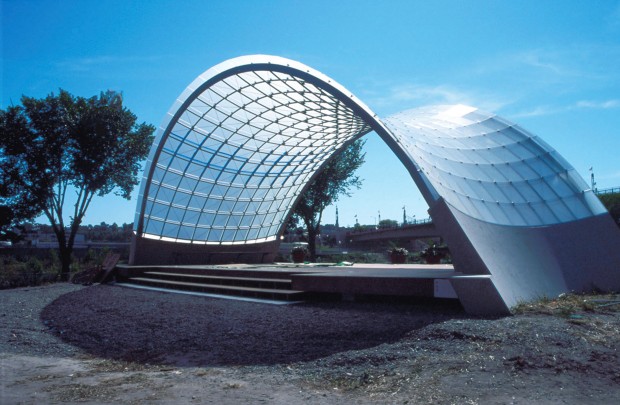