The Lens Ceiling is a unique public artwork that is the focal point of the Special Proceedings Courtroom of the new Federal Building and US Courthouse in Phoenix, designed by Richard Meier & Partners.

This delicate, suspended cable structure is a spherical form intersecting a horizontal plane, as if a bubble of air was resting gently on a surface of water. Precise engineering and ground-breaking use of modern laminating technology have made this project possible.

The ceiling provides a thermal and acoustic boundary for the courtroom space. The central ‘lens’ area of the ceiling acts as a diffuser for artificial light, while the clear perimeter provides views of the sky from the public gallery. The rolled glass pattern transforms the ‘lens’ into a glowing, shimmering surface.

The horizontal ring beams in the six-storey drum of the courtroom provide compression rings, making the tension structure of the ceiling extremely efficient, while the mass of the glass surface acts as a stabilising element. Movements within the structure due to changes in temperature or seismic events are accommodated at each glass panel. Even after an accidental breakage the panels will stay in place through a thick interlayer in the laminated glass, normally used in hurricane-prone areas. The glass surface acts as a diaphragm in an earthquake, transferring lateral forces to the building’s frame. A sprinkler system is integrated into the structure, substituting for the cables where necessary.

The ‘Lens Ceiling’ received the General Services Administration Award in 1998 and the Benedictus Award in 2002. 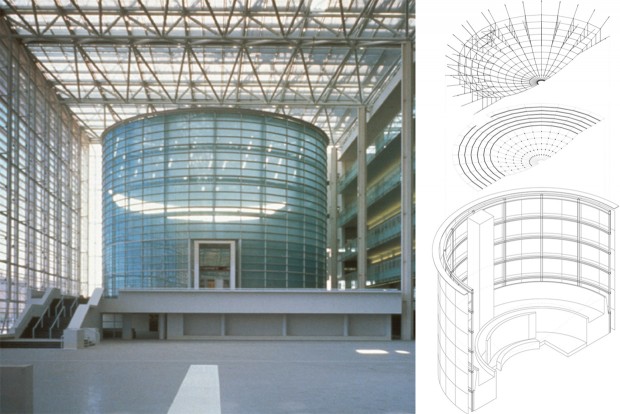 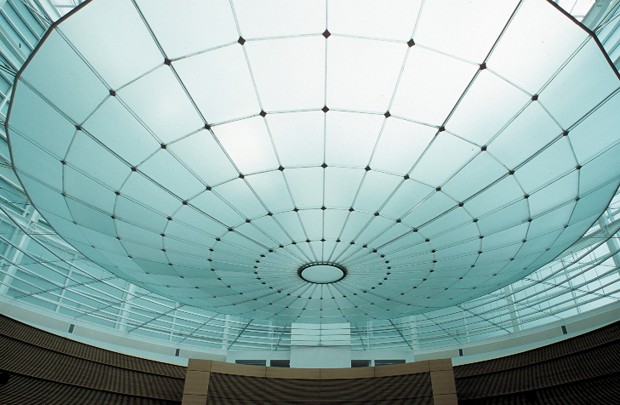